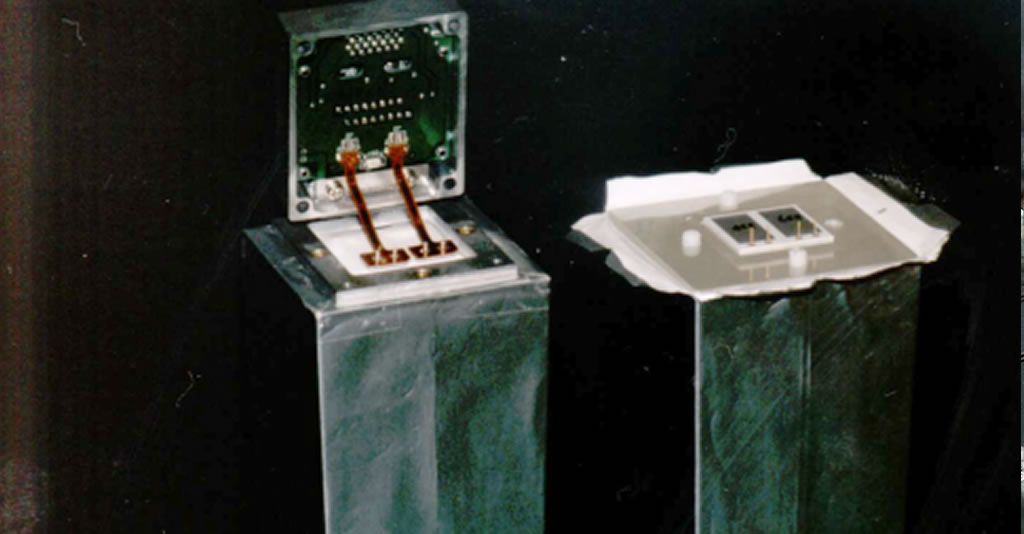 The Electromagnetic Calorimeter for Belle II experiment (ECL) will reuse the Belle detector ECL with an improved readout electronics. In the forward region an upgrade is being studied, which will be implemented later on. The Belle electromagnetic calorimeter consists of 8736 CsI(Tl) crystals with typical dimension of 6×6×30 cm3. Figure 1 shows a schematic view and a picture of a crystal equipped with photodetectors.

The main purpose of the electromagnetic calorimeter is to detect photons and π0‘s from B meson decays. Energy of such photons ranges from few MeV to few GeV. Energy resolution is very important in order to separate signal and background events only with mass distribution. To separate two photons from high momentum π0, fine granularity is required. Hermeticity is also very important to study final states with neutrinos. The calorimeter has pointing geometry and covers polar angle from 12° to 155°. The scintillation light of the CsI(Tl) crystal has wavelength λ = 560 nm with rather slow decay constant of 1.3 μsec but abundant light output of about 50000 p.e./MeV. The light is read out by two independent sets of silicon PIN photodiodes (Hamamatsu S2744-08) with sensitive area of 10×20 mm2 connected to charge sensitive preamplifier. Two signals from preamplifiers are first added and then processed with two shapers with 0.2(fast) and 1μsec(slow) shaping times. The readout electronics in Belle was designed to cope with a 300 Hz trigger rate, while in Belle II a rate 100 times higher is expected. Radiation damage is also an issue for high luminosity collider experiments and the calorimeter will also be affected. To cope with such situation waveform sampling together with pipelined readout have been introduced. The former enables to use timing information to discriminate off-timing hits while the latter can eliminate effectively readout deadtime.

Heart of the system is a Shaper Digitizer board which receives preamplified signals from 16 crystals. The shaped signal is digitized and sent to a pipeline buffer in FPGA which is 512(290μs) deep. Once a trigger is issued, waveform fitting is performed in FPGA using 16 samples to extract timing and amplitude. According to simulation studies a reduction of a factor of seven in the cluster fake rate is expected with the upgraded readout system. A sketch of the ECL transverse view, with the clusters produced by good physics signals and off-time background particles is shown in figure 2, along with a description of the old and new readout electronics.

Due to the higher background and very high occupancy, in the forward region the pileup level can severely spoil the energy and time resolution of the detector. The replacement of all or of a part of the crystals with a pure CsI ones will allow to overcome such limitation, thanks to a decay time of 30ns. The baseline option for the readout of pure CsI crystals is photopentodes, an R&D is ongoing to study the possibility of using APD’s. Avalanche Photodiodes have the advantage of being smaller and two of them could be installed in a crystal allowing a redundancy in the readout. No change in the mechanics will be necessary and they are not sensitive to the magnetic field. On the other hand they are sensitive to temperature variation and they have a gain much smaller than phototubes.