Belle II, the super-B factory experiment seeks to reveal new weak interactions in the flavour sector and discover new strongly interacting particles.
The key physics questions to be addressed by SuperKEKB and Belle II are:

What´s the matter with antimatter?

When the universe began, with the Big Bang, there was nothing but energy. There were no atoms or molecules or planets or stars, just energy. As the early universe cooled this energy formed matter, the electrons and protons and neutrons that you and I are made of. In fact everything we see and interact with is made of matter - our bodies, the air we breath, the food we eat, even the computer you’re reading this on are all made of matter.

One of the questions physicists seek to answer is why was there was an imbalance of matter and antimatter at the beginning of the universe? Experiments performed by particle physicists in the past have already discovered a small asymmetry in nature, called charge-parity violation, which shows that nature has a slight preference for matter over antimatter. However, this imbalance is too small to explain how our universe came into being, there must be more asymmetry that we have not yet discovered. By studying the behaviour of particles at BelleII, and other modern experiments, we can search for other sources of asymmetry in nature and work towards understanding the origins of our universe and ourselves.

Does nature have multiple Higgs bosons?

In 2012, experiments at the LHC,  which is the highest energy particle accelerator,  found a signal for the expected  and long-awaited particle called the Higgs boson.
This discovery was recognized by a Nobel Prize for the theorists  Peter Higgs and Francois Englert in 2013.
The Higgs particle completes the core theory of particle  physics called the Standard Model.
The interactions of the Higgs boson (sometimes referred to  as the “God Particle” in the popular press) is responsible for the masses of the other elementary particles such as the electron.

Most theories of particle physics that go beyond the Standard Model and attempt to explain the various mysteries of the universe predict that the Higgs boson is not alone and is part of a whole family of new particles.
There could be additional particles that are uncharged like the Standard Model Higgs and one that is electrically charged, the charged Higgs.

These additional Higgs-like particles can be searched for at the LHC where they can be directly produced and at Belle II where they are produced in an indirect fashion. In particular, Belle II has the best sensitivity to the charged Higgs particles in special and interesting B meson decay modes with tau leptons and neutrinos.
[The tau lepton is a much heavier cousin of the electron and muon particles.]
These tau lepton decay modes are reconstructed by first reconstructing a single B meson and then examining the decay products of the opposite anti-B meson. Again this is an important strength of the Belle II experiment and distinguishes it from other experiments.

Physics beyond SM
The Standard Model (SM) is the basis of today’s particle physics, which explains the nature of all the known fundamental particles and their possible three types of interactions, known as the electromagnetic, weak and strong interaction. The SM contains quarks and leptons, which are the constituents of matter, and bosons, which are the mediators of the three interactions. There are 6 types of quarks and 6 types of leptons; all of them have been found in experiments. The quarks and leptons are grouped into three generations, each consisting of two quarks and two leptons, distinguished by largely different masses. In 2012, the Higgs particle, which had been predicted 48 years earlier to explain the origin of mass was discovered by the experiments at the Large Hadron Collider (LHC) at CERN, While the SM explains almost all phenomena so far observed by experiment, there are yet a number of reasons why physicists are not satisfied with it. For example, the SM has many parameters, which cannot be deduced from first principles, and need to be determined from experimental measurements. Although the origin of mass is explained by the Higgs mechanism, we do not know yet why there are exactly three generations as described above. In addition, the SM is far from explaining the central mysteries of the Universe: Why matter dominates and why anti-matter cannot be found ? What is dark matter ? What is dark energy ? Hence physicists believe that the SM is not the ultimate theory, but rather an approximation applicable at the energy scale, which so far has been accessible to experiment. In fact, many theoretical models predict there should be new particles associated with New Physics (NP) beyond SM, at the tera-electron volt (TeV) energy scale, which is accessible in upcoming experiments. One approach to find evidence of NP takes place at “energy frontier” experiments, in which a very high energy particle accelerator produces new particles directly and their decays are observed. The ATLAS and CMS experiments at the CERN LHC collider are following this approach (see 1a). Another promising and complementary approach is based on “luminosity frontier” experiments, at which one tries to find deviations from SM predictions with high precision measurements. Such deviations can occur if a new particle exists and appear in intermediate state when quarks and leptons “jump” between generations (see 1b). Earlier B physics experiments (Belle at KEK, BaBar at SLAC, LHCb at CERN) found indications of such deviations. In the Belle II experiment, we will try to measure decays of B and D mesons (mesons containing b or c quarks, respectively) with great precision to clearly establish such deviations. Belle II will also try to observe decays of the  lepton to either muons or electrons, which are forbidden by the SM. The discovery of such deviations and forbidden interactions will break the SM and open the window to study NP and explore even higher energy scales.

Is there a dark sector of particle physics at the same masse scale as ordinary matter?

Dark matter has remained a source of intrigue among scientists since its conception nearly a century ago. It is known to comprise roughly 80% of the matter in the universe, making it five times more abundant than visible matter. Its composition, however, has yet to be unveiled. While the Standard Model of particle physics is a fairly accurate portrait of visible matter in the universe, it cannot encompass dark matter; this must be incorporated by physics beyond the Standard Model.

One such extension suggests that dark matter may be composed of Weakly Interacting Massive Particles (WIMPs). The primary motivation for this type of dark matter is its ability to explain the matter-antimatter asymmetry in cosmic ray energy spectra. Should this fail to be the case, however, there is only one other proposed solution which has withstood the test of time. These are axions and axion-like particles. Considering the vast quantity of dark matter in the universe, it is likely composed of a complicated system of particles as is the case for the Standard Model. This suggests that dark matter particles would carry force and that dark forces would be a crucial component of the dark sector. Such is the appeal of axionic dark matter.

One force carrier is the dark photon. As suggested by the name, it has a mathematical structure which is similar to the Standard Model photon with which it mixes. This mixing allows the dark photon to take the place of a Standard Model photon, opening up a massive array of electromagnetic interactions involving the dark photon. Put simply, the dark photon can potentially interact with leptons (a class of well established Standard Model particles which include electrons and muons) in ways which allow for nice detection signatures as shown in the left figure. Additionally, the dark photon may decay into other undetectable dark matter particles, providing scientists with a much more difficult detection signature like as shown in the right figure. Despite the difficulties, efforts are underway within the Belle II collaboration to set up special triggers for a “mono-photon” signature.

At SuperKEKB, high energy electrons and positrons will collide to produce a slew of processes; the overwhelming majority of which will result in a pair of final state leptons. During operation of the original KEKB collider, these were largely assumed to be background; uninteresting throwaway processes. However, with the potential of a dark sector’s existence, comes a new life for these high energy lepton pairs, any one of which may have decayed from a dark photon rather than a Standard Model photon. 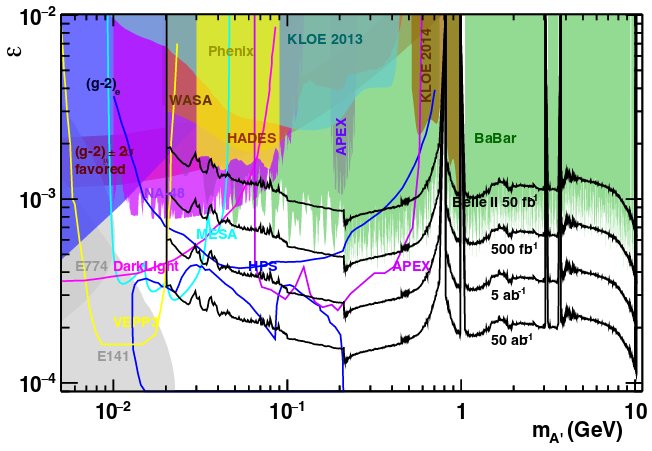 Attempts to find the dark photon have come in many forms, though none seem as promising as a search at what will be the world’s most luminous electron-positron collider, SuperKEKB. From 1999 until 2010, the original KEKB collider allowed scientists with the Belle collaboration to sift through nearly 1/ab of collected data. Now, with the upgrade to SuperKEKB and the new Belle II detector, scientists will have 50 times as much data to employ in their endeavours. With increased data comes access to previously unexplored parameter space, hence the excitement of SuperKEKB and Belle II. Projections on dark photon exploration in the Belle II collaboration have already been made and they far surpass other dark photon searches worldwide, as can be seen in Figure 3. This is largely due to the “clean” signal that electron-positron collisions will provide, along with having a known center-of-mass energy for those collisions.

What is the nature of the strong force in binding hadrons?

The matter that forms our world is fundamentally made of particles called quarks that are held together by sticky particles, the appropriately named gluons. The force binding together these fundamental constituent is the strong force, one of the four fundamental forces of nature, together with gravity, electromagnetism and the weak force.

As its name implies this force is the strongest force of the four. Quantum Chromodynamics, familiarly called QCD is the modern theory of the strong interaction.

It is one of the great theoretical challenges facing physicists understanding how the tiniest elementary particles give rise to most of the mass in the visible universe.

Physicists have made huge strides in understanding the workings of quarks and gluons, but a number of puzzling mysteries remain. It is unclear how quarks and gluons contribute for example to the mass of the protons and neutrons in atoms.

Experiments at particle accelerators in the '50s and '60s showed that protons and neutrons are merely representatives of a large family of particles now called hadrons. A hadron is any composite particle that is made from quarks, anti-quarks and gluons.

Among the most challenging and fascinating goals of modern physics are the endeavours to understand how the spectrum and structure of hadrons emerge from the forces among their fundamental constituents and to find out whether there are new forms of matter.

Belle II will reveal the building blocks of matter in greater detail than ever before and it could help physicists better understand how quarks and gluons interact.